In 1956, the warm-up track at the Melbourne Olympics was the first one using a 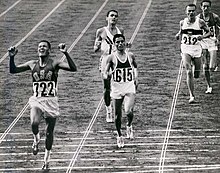 mixture of rubber and asphalt, beginning the age of the synthetic track.  In 1968, the first TARTAN track was used in the Mexico City Olympics and by the 1970’s most tracks had switched over to some type of all-weather surface.  Prior to this, the tracks around the country and the world were cinder, using old ash and coals from coal fired power plants associated with industrial/academic facilities.  Due to concerns with the potentially hazardous material that spent coal is, most cinder tracks converted to dirt (stone dust) or went with the more modern, “rubberized” formats available.

The school I work at is not one of latter.

It is my belief that our district is the only facility in the state that still uses a dirt track to host high school track meets.  A few years ago, Sant Bani School hosted meets in Sanbornton, but as the school scaled back to focus on providing only a K – 8 education and lost one of the legends of HS cross country and track and field fame (Scott Clark), there are no high school meets on their track.

When I was a student at Mascenic, back in the 80’s, we did not have a track.  It was six lap to the mile in the parking lot  and I remember running mile repeats that way.  At the time, we raced a lot at Hollis (with their 400 yd dirt track) and it was infrequent that we ever ran on the newer surface tracks. In the early 90’s, some local community members got together and through volunteerism and some in-kind work, upgraded the sports “complex” giving the district a stone dust track.

Nearly twenty years later when I came back to coach at my alma mater, I felt under privileged not having an all surface track we could train on regardless of the weather.  Most other schools could start developing their speed as soon as Mother Nature would cooperate.  For us, we generally have to wait until mid-April before the ground was thawed and the track dried up enough that the grounds crew could get out there and work on it.  With an early spring, we might get on it the beginning of April, but if it was a wet one, the beginning of May.

Further, during each season we would also have to suspend our use of it, as the grounds crew regraded it, dragged it and rolled it . Even after this preparation we have to wait until the track can set and get firm enough to use for running.  Every year, whether it be late in the fall or early in the spring, we get local residents that walk on the track while it’s soft, sometimes leaving 2-inch craters with every foot step all the way around the track in lane one necessitating some work no matter the condition we left it in after cross country was over.

Like I said, this used to annoy me to no end, but as I’ve learned to live with it over time, I think I’ve come to prefer the fact we have a dirt track over a synthetic one.  Getting the lines down before a meet is a pain, and not being able to use it for workouts we would like to use to tune up for a meet can get frustrating.  However, in figuring out how to get around such issues definitely makes the athletes more flexible when they get to a meet and things don’t line up simply for them.  They adjust and move on.

Every spring, I prepare my distance schedule to not include using the

track until we get back from April vacation.  We find ways to get our workouts in, searching out places we can replicate conditions.  We also have begun to use some post meet opportunities to get additional work in while we are at someone’s host track.  Not that we are the Nike Oregon Project, but we’ve been known to turn some 200’s at the end of a meet so we can “feel” the speed we want to run.

For cross country, we use the track four specific times per season.  We have two workouts we use for comparison from workout to workout, and year to year.  The rest of the time we try to do our workouts on grass (and sometimes the track has enough grass to replicate race course conditions), so we are used to it when we get to races.  Often times the track gets regraded right before school starts, so when the public comes up to watch a soccer game (the field is inside the track) the place looks nice.

So in retrospect, while having an all-weather track would allow for us to host more meets, spend less time prepping for meets, and train according to the schedule, I feel that the benefits of the dirt track outweigh the negatives.  My athletes are less likely to get injured, over train and become reliant on specific conditions for all of their workouts.  We’re more inventive with our workouts which helps keep everything fresh. We focus on strength, which I feel serves our program better and makes the athletes more resilient.

So while I’ll be cursing the track in the early hours of May 6th when I’m trying to get it ready for our one and only home meet, the rest of the 365 days I am thankful for our undeserving track.

Fill out this form to update your school's info